OUR STORE FRONT WILL OPEN

FRIDAY, DECEMBER 9 FOR 8 AM

Located in the French Quarter of New Orleans, the Cathedral-Basilica of Saint Louis, also known as St. Louis Cathedral for short, is not only the oldest active cathedral in New Orleans but is also the oldest active cathedral that’s been in continuous use in the United States. Cathedrals are often named after the most popular saints in Catholicism, and this New Orleans structure is no different. This cathedral is dedicated to Saint Louis, who was King Louis IX of France. Louis IX enjoyed a massive amount of prestige during his time as King of France, ruling from 1226-1270, and was seen by contemporaries as the ideal king. He banned trials by ordeal, introduced presumptive innocence during trial, and attempted to curtail the French aristocracy’s fondness for waging private wars.

Needless to say, Louis IX was highly religious, and he was known as the “monk king” by those who saw his religiosity on display frequently. Despite being a generally tolerant monarch with a focus on improving the lives of the peasantry, he was not meek, and led the Seventh and Eighth Crusades against Islamic states in Egypt, North Africa, and Jerusalem. Unfortunately for Louis, these crusading efforts ended in disastrous Frankish military defeats, culminating in his sickness and death in Tunis. Pope Boniface VIII declared Louis IX a saint in 1297; Louis is the only French king to be declared a saint.

As the oldest active cathedral in New Orleans was first known as St. Louis Church, and it was founded in 1720 by the French who gave it its namesake. The church that would expand in size and service and become the cathedral was burnt down in the Great New Orleans Fires of 1788 and was rebuilt in 1789 with the groundbreaking of its current architecture and the laying of its cornerstone. The structure was completed in 1794. Thanks to the growing size of Catholics in the area, even during the reconstruction period, the Holy See declared the church a cathedral in 1793.

St. Louis Cathedral underwent further architectural evolution in the 19th century. Benjamin Henry Latrobe designed and oversaw the construction of its central tower with its iconic clock and bells. The bell’s embossed with “Victorie” to commemorate the Battle of New Orleans in 1815 which saw the United States defeat the British. The cathedral underwent several different expansions, repairs, and more during its lifetime, including being rebuilt from a bombing in 1909 and a collapse of a portion of its foundation in 1910. Hurricane Katrina damaged some of the cathedral’s architecture, statues, and even its organ due to water damage, which resulted in lengthy repairs.

Today, St. Louis Cathedral still operates efficiently and serves as a cornerstone for the Roman Catholic community in New Orleans. After all of the trials and tribulations the cathedral has gone through, its legacy remains steadfast and true into the future, just like its saintly namesake. 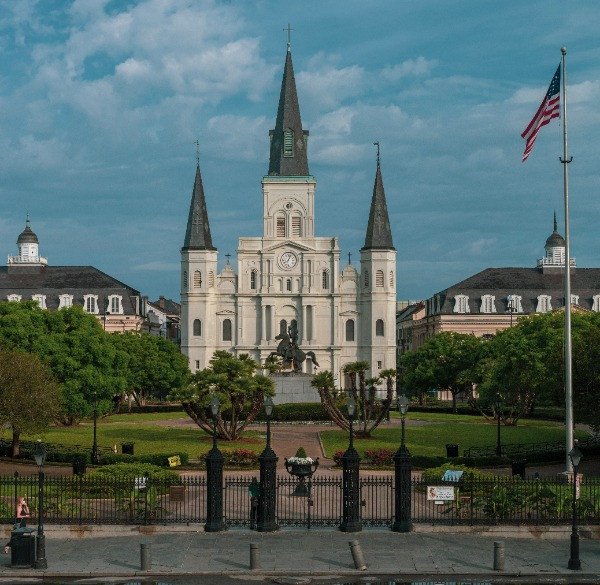