When is King Cake Season?

Although some like to think that it's king cake season all year round (and who are we to judge a demanding sweet tooth?), there's a certain date that king cake bakeries in New Orleans hold as sacred: January 6th.

Few tastes of Louisiana are taken as seriously as the savory-sweet king cake, and for a good reason. New Orleans is a city of proud tradition, and families familiar with Mardi Gras, they know the importance of the sixth of January. The reason this date is the start of king cake season is that this is when, according to Biblical lore, the three kings gathered together and visited the infant Jesus in the manger.

Inside of king cakes is usually placed a plastic baby, a symbol of the little Christ hiding from the forces of King Herod who looked to slay him. Today, however, whoever bites into their king cake and finds the little figure is expected to buy the next king cake for everyone!

King cake season winds down around February 28th, the last day of the month, because that is when Mardi Gras ends. This is also why king cakes are colored green, purple, and gold: to symbolize the colors of Mardi Gras. However, king cakes in New Orleans tend to start disappearing around Fat Tuesday.

For those who follow the convention, January 6th is when you can have your first slice of king cake. Although people begin having their sweet tooths ache in the waning December, all Mardi Gras veterans will say that the wait to eat king cake is what helps make it so irresistibly delicious! King cakes in New Orleans have a wide history of flavors, colors, and lore for each style, all dating back to their European national origins and the Biblical stories of old.

In New Orleans, most don’t usually fudge with the calendar date of their first slice of king cake, but plenty of folks have their knives out at 11:59 on January 5th for a midnight treat! 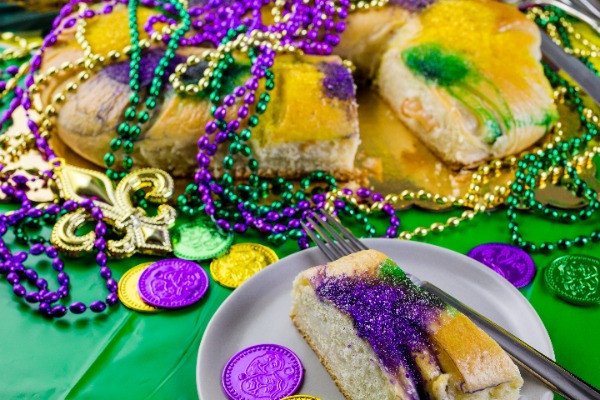