The Mystic Krewe of Barkus and Krewe de Paws

Want to be able to actually take your dog to a Mardi Gras parade and march in it? Then look no further than the Mystic Krewe of Barkus and Krewe de Paws!

The Mystic Krewe of Barkus was founded in 1993 as a non-profit when Jojo McWood’s dog received unpopular remarks at a local bar. As a means of revenge, McWood made her dog the Queen of her parade and Captain for Life, starting the roots of the Mystic Krewe of Barkus! The Krewe has featured a multitude of theses throughout the years, each being able to include costumes and dog-friendly elements that all revelers have come to look forward to every year! Recently, the Barkus Cares Fund has started in order to raise donations for animals that need veterinary care during unique and trying societal times.

Krewe de Paws was founded in 2009 as Olde Towne Slidell’s Canine Carnival Krewe. The decision was made to base the Krewe off of the locally-known Cafe de Bone Dog Bakery and Boutique, where one can purchase a perm for their pooch along with dog-friendly snacks that can be given out during the parade. Each year, members of Krewe de Paws love to dress their four-legged friends in theme costumes and parade them around in baby strollers, decorated wagons, and even shopping carts! The Krewe welcomes non-marching dogs, which are allowed for the specific event. Krewe de Paws seeks to highlight animal welfare causes, bring eyeballs onto Olde Towne Slidell, and have fun while doing it!

The websites feature donations that go towards animal rescues and shelter services that provide critical support for dogs and pets-to-be in need. Although it’s not recommended to feed king cakes to your dogs, it’s important that we all find ways to celebrate these noble canines and the companionship they bring us all every day! 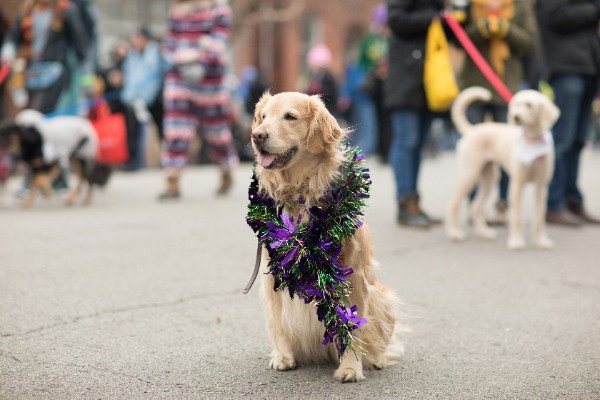