THANK YOU FOR A GREAT 2021 MARDI GRAS SEASON.

WE'LL SEE YOU NEXT YEAR!

The History of New Orleans' Favorite Sandwich: The Poboy

Lovingly abbreviated to "poboys," poor boy sandwiches are foundational to the culinary culture in New Orleans. It's revered as the Gulf Coast take on the Northerner's submarine sandwich. The poboy outstrips its competition thanks to its deceptively simple yet highly satisfying combination of flavors, textures, and ability to be customized. In fact, the poboy is almost as diverse as New Orleans itself!

Although French bread sandwiches have existed for quite some time, the poboy got its start in 1929 after the Martin Brothers decided to test out a sandwich idea at their Market Restaurant and Coffee stand. The family's sons worked as conductors of streetcars in the prior decade and understood the value of a quick meal that was also filling for the average working man. The term "poor boy" was coined during the 1929 streetcar strike when the street railway employee's union staged demonstrations near their little hole-in-the-wall joint.

At the time, there were nearly 1,100 jobs at stake that the union was fighting to protect, using their bodies as blockers for streetcars being run by criminal "scabs." As one of the most violently opposed direct actions in US history, the displays of aggression against the striking workers garnered much sympathy from other working-class folks around the nation, which included the Martins. Having streetcar backgrounds themselves, the urge to help was only further kindled in their hearts.

The Martin Brothers declared that anyone belonging to division 194 could eat their sandwiches for free and that the family would support the strikers "until hell itself froze over." Wanting to make good, they consulted with John Gendusa, their bread supplier, to make a loaf that was long and uniform in shape that could be easily stuffed and topped. They made sure that the ends of the loaf were tapered so as to be easier to manage and to keep the hot, tasty contents from sliding out onto the road. The little pieces were eventually lopped off in order to be used as sides for plate lunches as the first loaves made to help feed the striking masses were over 40" long!

The extra-long loaf was a truly industrial-era innovation thanks to the advancements in commercial baking technology, and hence it was called by the Martin Brother's bread maker: "The Special." In fact, the term "special" is still used on the John Gendusa Bakery's options for bread sleeves to this day!

The poboy has become a melting pot of cultures as many people have left their mark on the sandwich's history. Germanics took over baking in the middle of the 1800s in New Orleans, leading the French breads to become lighter and flakier. Italian immigrants and African Americans working in kitchens also supplied Cajun restaurants, leading to an increase in Creolization of the poboy's future contents. Americans now know the "Vietnamese poboy," known collectively as the "banh mi," thanks to the advent of Southeast Asian cuisine becoming more prominent in New Orleans.

Ironically, the term "poboy" may have originally been applied in a joking manner because streetcar workers were once one of the highest-paid employees in New Orleans since their union began in 1902. However, the Martin Brothers would call the striking workers "poor boys" rather than "poboys" since the latter term was more applied in New Orleans to street vagrants, and the former term was to be applied to what they've decided was the former "aristocrat of workers" now forced into the streets due to their circumstance. Many in New Orleans debate which version of the term to use.

Despite the entrenched culture of the sandwich, an increase in food diversity has spawned the New Orleans Po-Boy Preservation Festival in 2007. One thing's certain: the poboy is here to stay and has proved to be as adaptable as the people of New Orleans itself. Only the future will tell how this humble southern sandwich can change!

Check out our other New Orleans-inspired blogs or take a look at Manny Randazzo's king cakes! 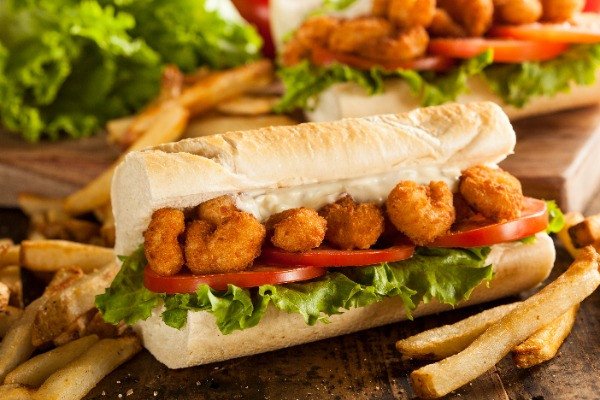