The Krewe of Orpheus is a musically themed krewe that derives its origins from the character Orpheus in Greek mythology. The Krewe of Orpheus established itself as a super krewe with incredible speed, having over 700 riders within one year of being founded. Celebrity monarchs have included Quentin Tarantino, Will Forte, Mario Lopez, Joan Rivers, Steve Zahn, and Bret Michaels. Membership in the Krewe of Orpheus is open to any person of good repute, with ridership conferred to those who are dues-paying members in good standing.

The Krewe of Orpheus is inspired by the Greek legend of Orpheus, who’s the son of Apollo and Calliope. Orpheus plays a lyre with a perfection unseen in any other being, and his music inspires the noblest of love, causing battles to end, mountains to bow, and animals to stop hunting one another. His lyre was made into a constellation by Zeus, and Orpheus became the patron of lovers as they gaze into the night’s sky.

Orpheus parades on Canal Street and St. Charles Avenue on Fat Monday (Lundi Gras), the day before Fat Tuesday (Mardi Gras). With over 36 floats, many feature elegant flowers and gold leaves. Notable floats include the Dolly Trolley, which was the actual horse-drawn bus from Hello Dolly, and Smokey Mary, which has grown into a massive eight-section float driven by a single person.

Collectables, masks, beads, and other assorted Mardi Gras trinkets are tossed from the riders of the float. Sometimes, stuffed animals and signature beads featuring Krewe of Orpheus motifs such as doubloons and dragons are tossed. The fantastic spectacle of throws ends inside the Ernest N. Morial Convention Center. There, the Orpheuscapade begins, which is where things really start kicking off in earnest!

Orpheuscapade is a black-tie party that occurs post-parade and goes on all night. The festivities include fantastic local foods, live music from regional and national artists, and of course, lots of dancing. The grand performances are open to the public by paid admission. Over 5000 people attend the Orpheuscapade every year, making it one of the top Mardi Gras celebrations in New Orleans! 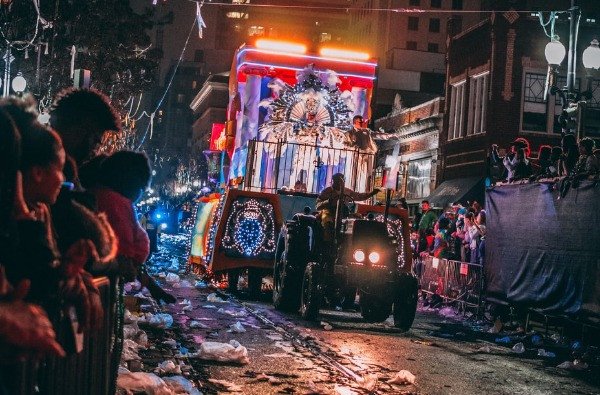