THANK YOU FOR A GREAT 2021 MARDI GRAS SEASON.

WE'LL SEE YOU NEXT YEAR!

“Thow until it hurts” is the motto of the legendary Krewe of Endymion. Ever since 1967, the Krewe has grown and grown until it has today become one of the largest Krewes in all of Mardi Gras! Endymion tosses over 15 million throws along the parade route, and they roll with over 37 floats! With so many throws, it’s little wonder that they’re gonna be hurting after the end of it!

The Krewe of Endymion is one of only three Krewes large enough to be considered a “Super Krewe.” Calling the Mercedes Benz Superdome it's home, Endymion is the only parade that rides through it. The Endymion Extravaganza is hosted within the Superdome, and it has seen countless guest performers such as Kelly Clarkson, Maroon 5, Rod Stewart, Steven Tyler, Pitbull, Luke Bryan, and several others! The Krewe boasts over 20,000 revelers entertained until late into the morning hours, partying and throwing until the first hints of daybreak.

King cakes in hand, people begin camping out for hours long before the first hints of the actual celebration starts. That’s because each year, Endymion floats level-up with new LED systems, smoke machines, and the latest fiberoptics to highlight the billowing confetti machines that blast treats regularly into the crowds. Most of the floats in the Endymion Krewe are tandem floats, meaning that they are essentially moving as one unit. There are multiple floats in the Krewe that have up to nine sections, and each float has a unique theme. The largest float in the Krewe of Endymion is the massive Pontchartrain Beach, a tribute to the Mercedes Benz Superdome which carries over 250 people and is over 300 feet in length!

There has been more than one report about some king cake sightings amongst the revelers, but that’s to be expected. What else would be a better fuel for tossing some mean throws than a genuine New Orleans king cake? 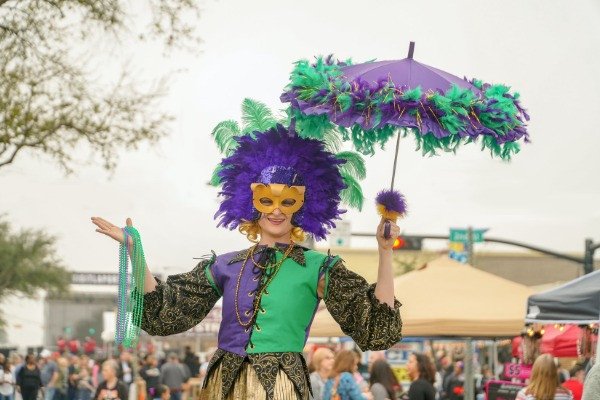