Founded as a fraternal organization in 1916, the Zulu Social Aid & Pleasure Club hosts the Zulu Parade each year on Mardi Gras Day in New Orleans, Louisiana. As a predominantly African American organization, the krewe is known for its satirization of blackface and members wearing grass skirts. The club states that in the past, Africans could not wear masks in parades or carnivals, but they could wear black paint. Although the practice was temporarily stopped during the civil rights movements of the 1960s, it has since become popular once again. The Zulu krewe is also well known for unique throws of hand-painted coconuts, sometimes still filled with water, for revelers to enjoy as refreshments. The krewe is also a staple of New Orleans’ Jazz and Heritage Festival.

The mutual social aid society known as “The Tramps” predates the founding of the krewe and would later evolve into the Zulu organization over time. The first King of Zulu was William Story, who was crowned in 1909. He was known for performing skits with his marching troupes while wearing a lard-can hat and carrying a banana stalk scepter. The King’s float was first designed in 1915, which consisted of tree moss, palmetto leaves, and other African themes constructed atop dry goods boxes on a spring wagon.

For the wives of Zulu krewe members, the Lady Zulu Auxiliary was created in 1933. This allowed more women to get involved and increased their visibility amongst the crowds. The progressive Zulu krewe was the first krewe to feature a Queen; the first one was Edwina Robertson in 1948. During the civil rights era, concerns about African characterizations abounded. However, by the 1970s, the krewe made it plain that they had reclaimed the stereotypes that others would set against them, embracing them as their own forms of parody and satirization that have since evolved into new meanings that transcend past connotations for the revelers of the modern era.

Any man of any ethnic or racial background may join the Zulu organization, making the krewe the first parade or march as a racially integrated unit. 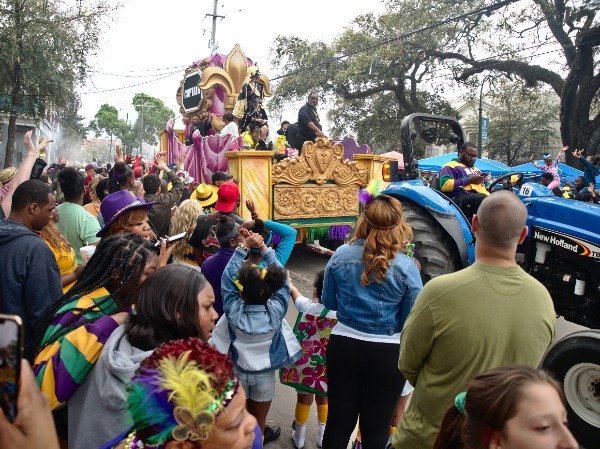